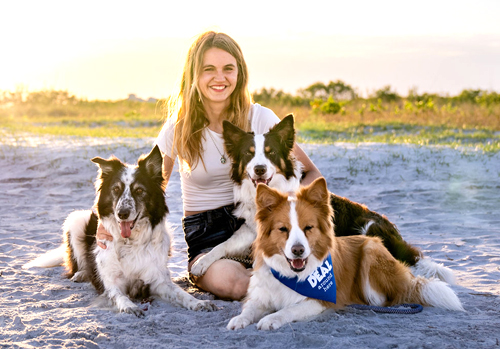 When the Ohana Dog Trick Show comes to your event, both Tiki & Stoke will as usual be with their trainer, Cassie Kennedy. She is the owner, founder, and trainer here at Ohana Dog Show.  She began training dogs when she was only eight years old, and started training for competitive agility with her Golden Retriever, Fathom, at the age of just eleven. She has always had a passion for both dog sports and trick training since then, and wanted to share that passion with her community through performances with her best friends.

At the age of fifteen, Cassie began performing both agility and trick demonstrations with her Border Collies. Her two mains goals are to help teach the general public about the importance of training their animals and educate people about the power of positive reinforcement through her demonstrations, In addition to that, she also recently graduated from Animal Behavior College and currently works running her own dog training business by the name Ohana Dog Training. She is a certified dog trainer and also a certified trick dog instructor. Her dream is to one day train service dogs for people who really need them.

She has also fostered numerous dogs for Ewenity Farm Herding Dog Haven until they found their forever homes, and she has also written numerous articles about animal rescue for Tampa Bay’s  “duPont Registry Luxury Living Guide” and has been featured in “The New Barker Dog Magazine“. In addition to performing at children’s birthday parties, she has also performed at a variety of other events with her dogs, and provided the pre-game show for Clearwater Threshers “Dog Days Of Summer” at Spectrum Field and for the Tampa Tarpons “Bark At The ParK”. Her passion for training has inspired her to bring a new Border Collie pup into the home, who she has lovingly named “Renegade”.

Cassie simply could not imagine a world without dogs. Although her favorite breed will always be the Border Collie, she will always hold a special place in her heart for Golden Retrievers, too. For it was her first dog, Fathom (a Golden Retriever) who originally inspired her to get into the wonderful world of dog training.